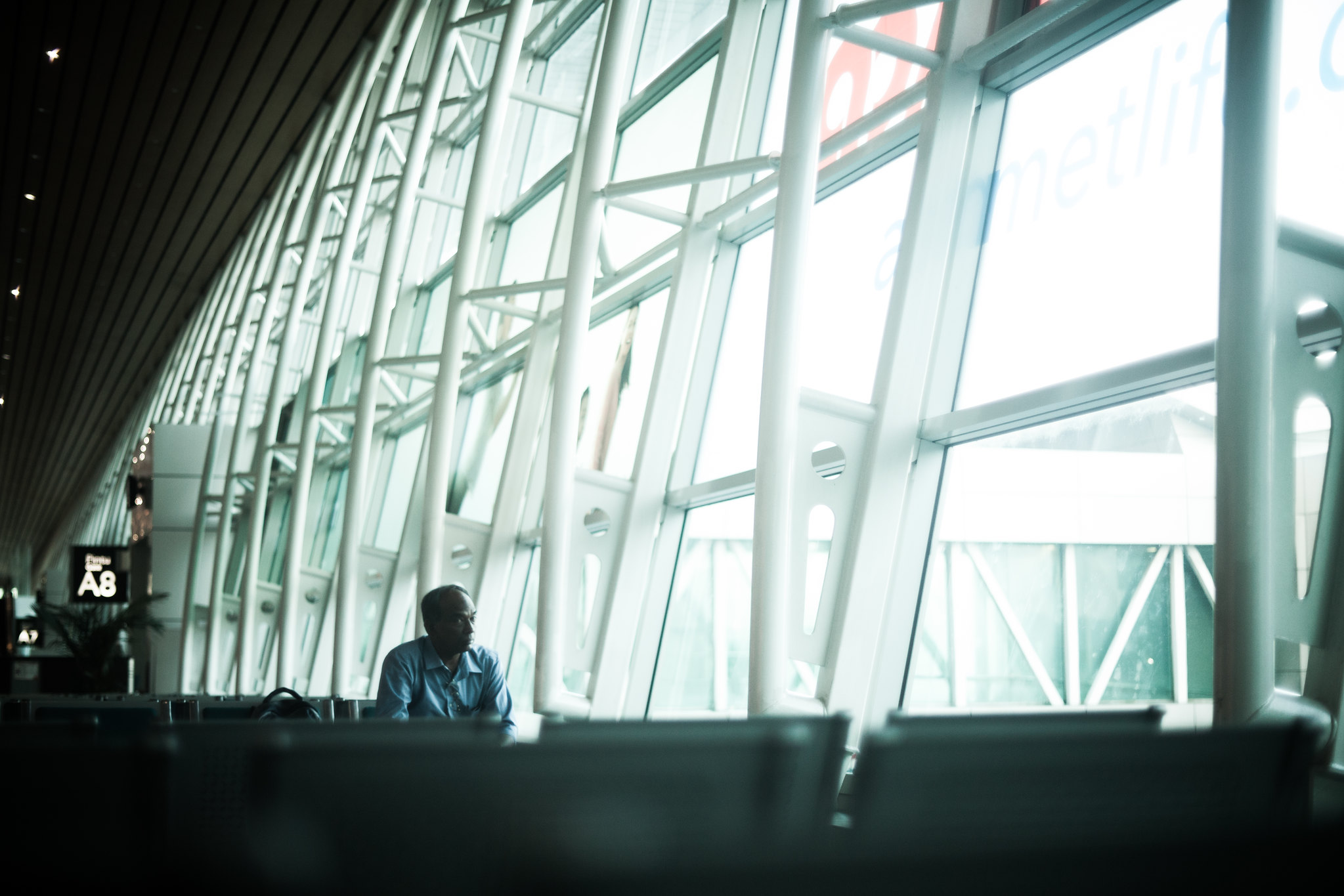 I’ve generally refrained from typing up a real blog post to go with my photos but I will make an exception here. This is a true story of the events following the capture of this photo.

My visit to Borneo was coming to an end as my visa was set to expire in only 8 days. With only one weekend left to enjoy this melting pot of Asian culture, I booked a stay at the Kinabatangan River, near Sandakan, with hopes of photographing some endemic species and perhaps some more controversial sights.

As I was waiting at KK Airport for my flight to Sandakan, around 6 in the morning, I saw this gentleman blending in quite well with the surrounding architecture. I’m always wary when taking photos of strangers so I tried to take this one discreetly but I think he may have noticed anyway.

Soon after we started boarding, I was assigned an aisle seat which was unfortunate as I wanted to time-lapse the 45min journey over the jungles (and palm oil plantations) of Sabah. After squeezing through the crowded plane I reached my seat and glanced over at the lucky occupant of the window seat. To my surprise, my neighbour was none other but this same gentleman. “What are the chances?” I asked myself. “Around 1 in a hundred..” I also answered. He looked back at me as I was stuffing my camera bag in the overhead compartment, and quickly turned away, as if he’d recognised me from earlier at the gate.

I hesitantly sat down next to him and we both suffered through the safety talk. The plane took off. I jealously looked through the window as Kota Kinabalu was becoming its own diorama beneath us.

To my surprise, he turned to me and started chatting. I told him about my photos and my upcoming stay at the river. I brought up the topic of palm oil which started off the most unexpected conversation.

The gentleman in the photo told me that he was an owner of a palm oil plantation – I had a mountain of preconceptions about the palm oil industry which were founded on wildlife conservation films and reinforced by my time spent on Borneo – I tried to hide my surprise and politely let him continue.

He told me he was taking this flight to meet with the company which owns 51% of his plantation, which spans 2000 acres (2.4x the size of Central Park, NY and almost as large as Richmond Park in London). His meeting was about some virgin trees on the plantation which the gentleman has left alone as they are a home to many birds and mammals, including hornbills and gibbons. These trees cover a total area of 50 acres – 2.5% of the entire plantation. The company wanted to cut down the trees to maximise the output of the plantation and since they own the majority share, they ultimately dictate the fate of the land.

My seat neighbour was travelling across the county to what seemed like a hopeless meeting however, he did have a plan. He wanted to propose that he would take the 50 acres under his 49% and give up some farmed land in return.

I wish I kept in touch with him to find out if his meeting was successful but I didn’t even catch his name. This ends the story on a bit of a cliffhanger, but it’s a hopeful one.